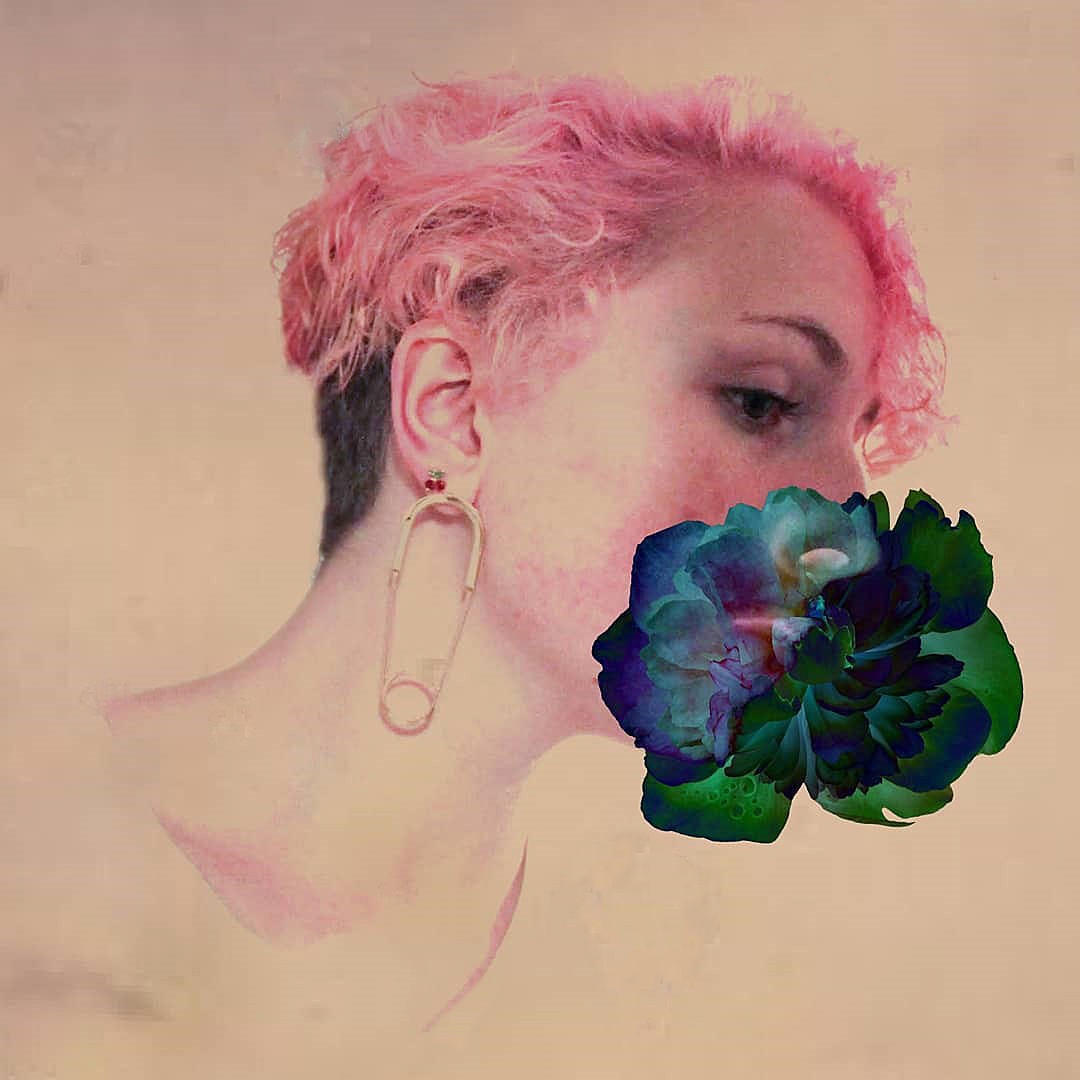 This piece is a small digital edit of a picture of myself. the meaning subjective but i love the feeling it conveys, through colors and body. 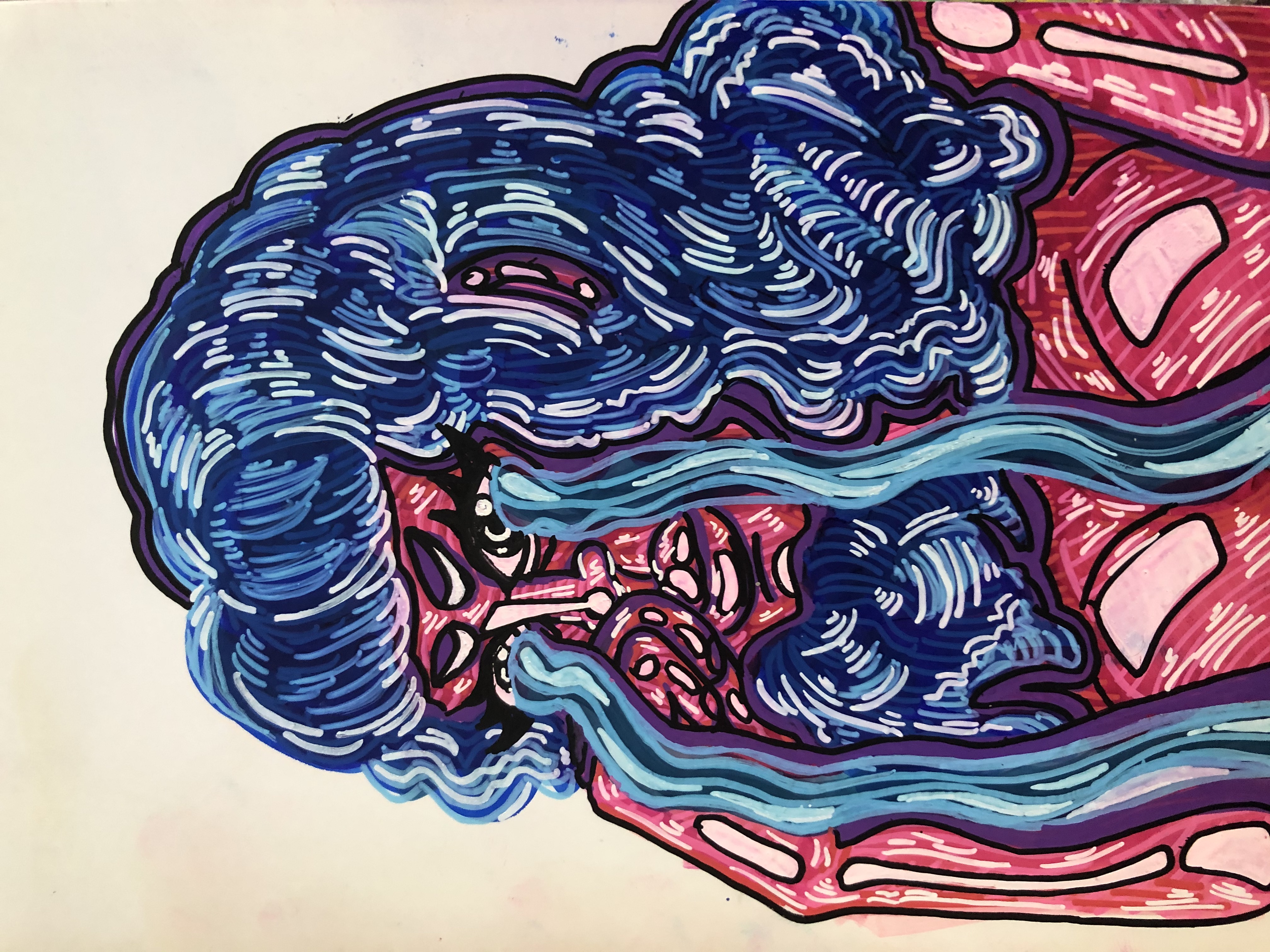 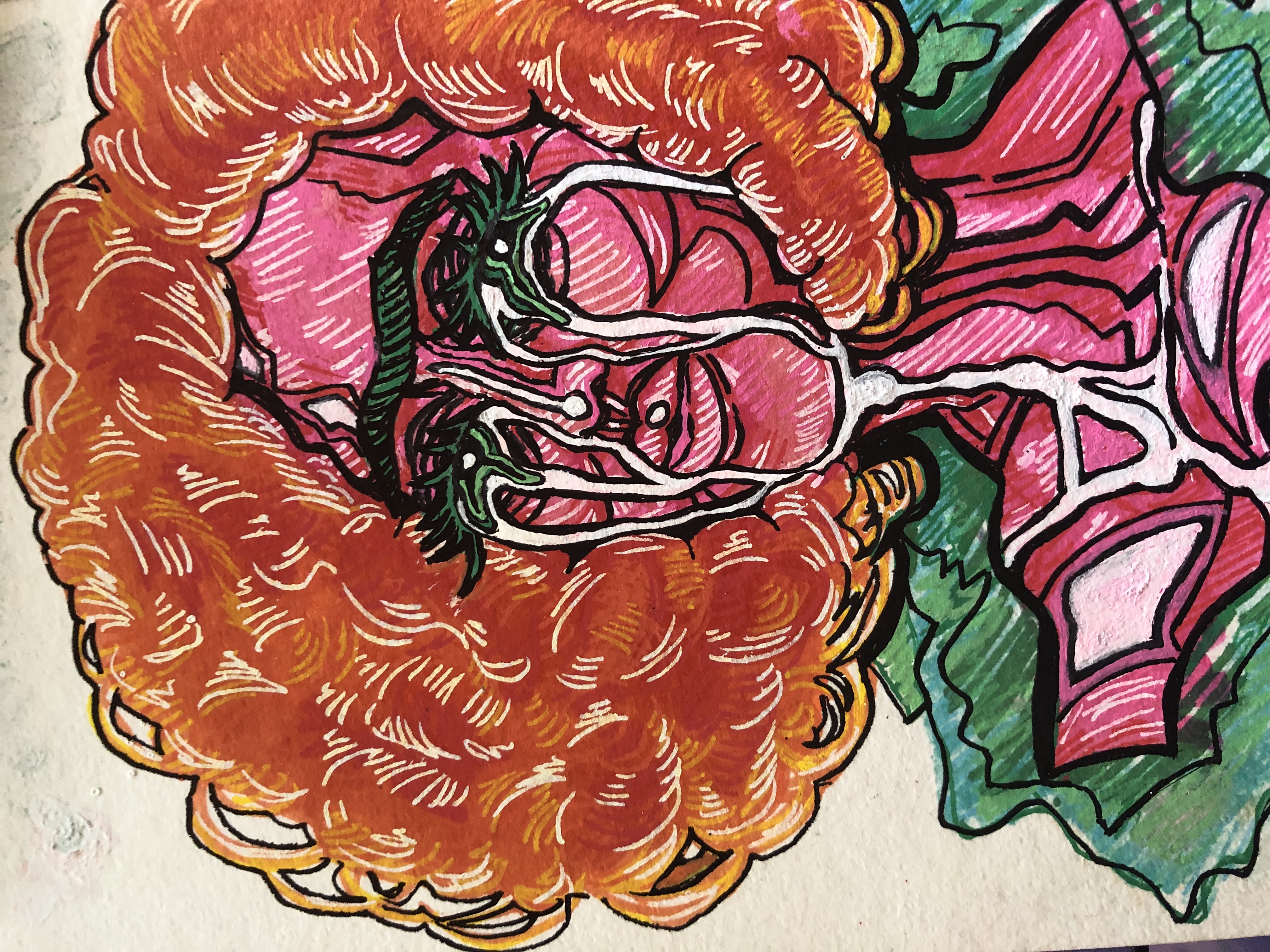 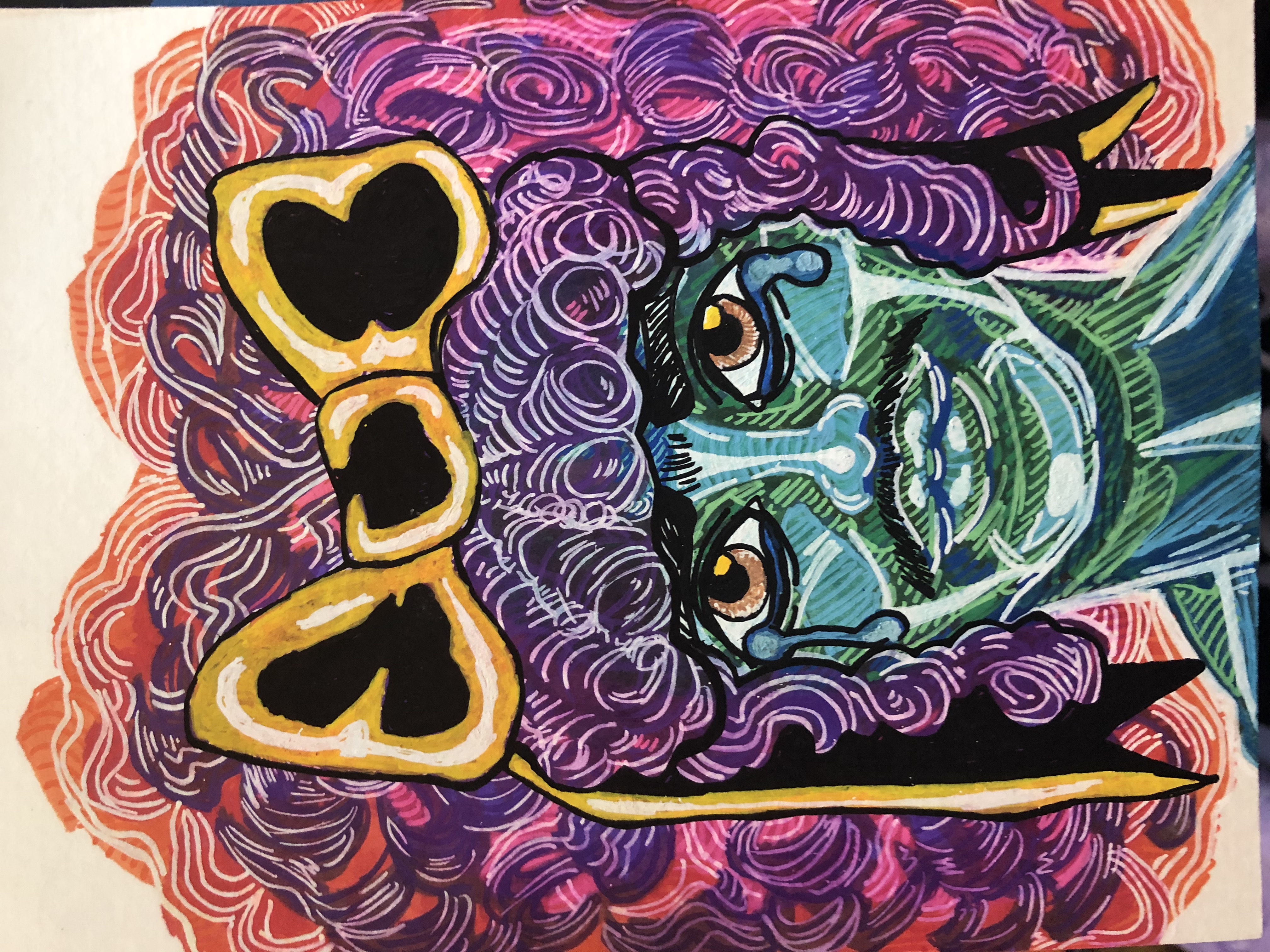 Most of my life I focused on realism and using only pencils. I never focused on color and I never let my own style develop. This year I’ve been doing a lot of art in my spare time. I’ve finally given myself space to explore color and style; it’s been really fun.

She’s Not A Monster

“She’s Not A Monster” is a brief and shallow look at my experience with disordered eating. This piece came about after I felt like I needed a way to get my feelings and experiences out.

By an Anonymous Author

She’s not a monster

Not some devil on my shoulder

Not some disfigured creature who wishes me harm

Who whispers curses and promises into my ear

She is me who pokes me

She is me who laughs at me

She is me who tells me I’m not good enough

She is me who is always happy

She is me who is always loved

But she says she has my best interests at heart

It is foolish that I believe her

Because she is heartless

Harold had nothing but her on his mind when he observed the museum. He knew exactly what it was that he needed to do, the time was now. With not a soul in sight, he slithered his way into the heart of the museum.

As Harold slinked through the desolate museum on nothing but the very tips of his toes, he allowed his eyes to venture across the near darkness. His retinas scanned over every inch of wall, disregarding shadowed figures in their frames as he searched for his true heart’s desire. Among the dozens and dozens of beauties lining the walls, there she finally reared her head: his chef d’oeuvre, his cream of the crop, his masterpiece.

Harold rattled with anticipation, his mouth salivating at the idea of her being so near. No longer able to keep himself composed, Harold gave into his primal instincts and galloped as valiantly as a Trojan warrior riding his steed into battle, chasing his own sort of glory: her.

Dashing across the vast compound of the museum took only a second for Harold, and soon enough she was close enough to touch, to smell, to taste. Here she was before him, in all of her grandeur.

Her beauty was enough to force tears from even the strongest willed, as if a bowl of onions was hidden behind her gilded panel. Every stroke of pigment knew its place in the world of her canvas, alternating between being distinguishable to the naked eye to disappearing among a sea of strokes. Her wispy bangs eclipse her eyes, making her even harder to read and her intentions unknown. There is a sense of uneasiness when staring into those amber stones. She feels real, and she is plotting against you in your most vulnerable moment.

Nothing could stop Harold from touching her, not the safety of her crystal sarcophagus, not even the subsequent alarm that rang throughout the hollow cavern. Harold allowed the severity of the roar in his ears to fade into the background. This was his moment. He was finally alone with her.

Harold removed her from the shards of her once effective prison, a place she hadn’t been taken from in years. The sensation of her ornate frame alone was nearly enough to send Harold over the edge. He refrained himself, only allowing the slightest tracings across her delicately carved edges. Harold shakily outstretched his fingers towards the canvas itself. Feeling that thick acrylic paint bury itself into the beds of his nails gave him a feeling of euphoria, a high that he knew he could only reach with her. He could feel the months of effort behind each stroke, no longer with his eyes alone. Harold could taste the pigment with the ends of his nails, he could finally feel that darkness behind her eyes. Yet, he still wanted more.

As he lay with her among the particles of shattered glass, he knew that he would never feel this level of connection with anyone else. This Dark-Haired Beauty was his soulmate. He hovered over her exposed paint, running his fingertips along her face, grazing her hairs, giving her a playful boop on the nose. This was paradise. Harold leaned in for a kiss, staring deep into that hellish golden abyss the entire time. The acidic sweetness of her lips put Harold into a state of pure ecstasy, he could taste every molecule of passion poured into her. He was in love with the feeling. Her scent somehow was even more lovely; the way she made his nostrils burn, the way she made him feel that oh-so familiar sting in the back of his throat.

Harold took no notice of the blotched shapes now surrounding him. A glint of fluorescence shining through his eyes could not take his attention away from her. The sounds of blaring alarms and barking of commands took a backseat to the silence behind her eyes. He could stare into those eyes eternally. 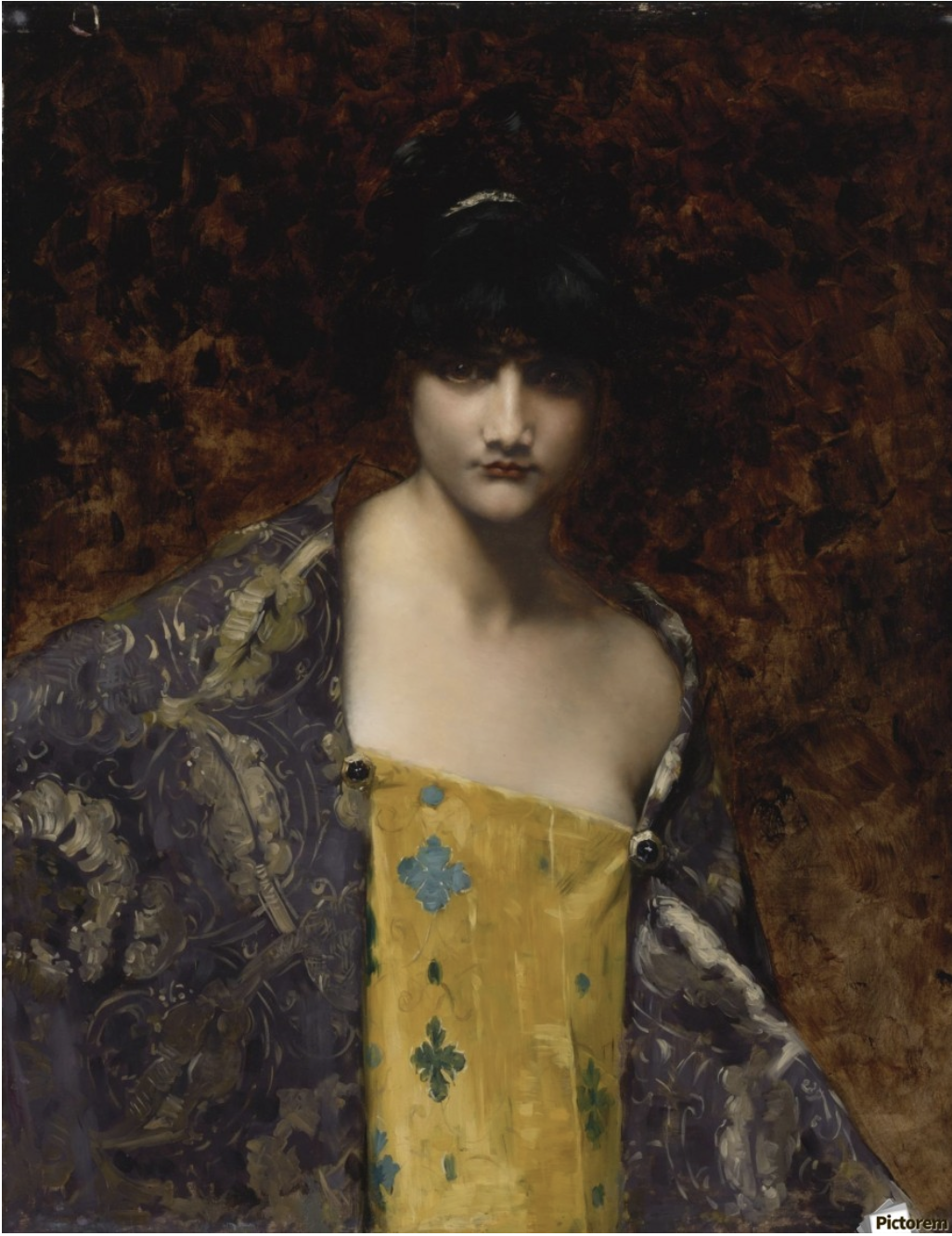