“I got you!” Cindy Johnson was ecstatic; Tally Kent’s red-stained white shoes were visible from across the room. She was crouching in the smallest, darkest space she could find.

“Darling, who did you catch?” Mrs. Johnson stepped into the outdated, sparsely decorated family room holding freshly bleached sheets. The blood splotches were still visible to Tally and she shied further into the space between the over-used liquor cabinet and the wall.

Cindy glanced over her shoulder and grinned at her all-too-mechanical mother and pointed to an empty corner.

Ava Galbraith is fascinated by unexpected turns in stories, particularly the reveal of villains. She dives deep into characters’ psyches and uses stream of consciousness to tell stories. Her work has been published in Ripples In Space podcast, The Dewdrop, Finding the Birds, San Joaquin Review, Open: Arts & Literary Magazine, and Voyage. When not developing intriguing flash fiction, she competes in equestrian show jumping and enjoys emerging herself in foreign cultures.

It is an assured fate that all that lives must die. It that lives without death, is as much a paradox as it that dies without life. It was a sweltering winter evening in mid-January, and dinner had just been set on the oak table of the two Dr. Bames. While the Bames had toiled tirelessly in their nine to five earlier that day, they spent hours that evening preparing a dozen or so dishes precisely seasoned and perfectly cooked. It reminded them of the Thanksgiving dinners they had shared with their family year after year. Today had no significance however, at least none the Bames felt like celebrating. Everyone on earth had spent the day like any other. If it is true that scarcity makes something valuable, then the day had been severely underspent.

The Bames filed their stomachs with foods containing the spiciest chilies, the most expensive saffron, and the most fragrant spices. Caviar adorned their plates like black pearls. They had officially begun planning this meal months ago, but deep down they both knew they actually started planning it many years earlier, when their research had been published, distributed, digested, understood, ignored and ultimately forgotten. It all tasted cold and flavorless like dust in water.

The Bames ate anyway, determined to finish their feast before the clock struck twelve, though they knew not what obligated them to do so. All was silent except for the putrid sound of chewing and swallowing, and the occasional din that occurred when one would get up to lose the contents of their stomach. Every dish was to be tasted and finished. Finally, one dared to speak.

“You know, it really is a shame,” said the first Bames.

“What is that, Dear?” replied the second as they cut apart a porkchop with all the haste they could muster.

“I can’t stop thinking about the children. They have so much potential, and by the end of the day it will all be for naught. I can’t begin to imagine what their parents must be going through.”

The Bames themselves had no children, a recommendation they had given to everyone else, but to no avail. Their friends and family had several kids despite the warnings that they would never live past their teens. Now those parents who had been blind to reason, today discovered they had spent years raising their children for the slaughter.

“I can’t help but remember a story my mother used to tell me when I was little. There once was a cow who never learned to open her eyes. She could see fine, her eyes were perfectly intact, but the stubborn old cow refused to lift open her eye lids. One day a stranger invited her and her calves to his house in town for dinner. She graciously accepted despite the fact her calves told her the stranger was the butcher from town. ‘I saw no butcher,’ she told her calves. So she and her calves go to town but they get lost on the way. She asked some of the locals for directions and they told her she is heading to the butcher’s house. She of course told them ‘I saw no butcher’ and continued on her way. Finally she and her calves got to the butchers house and he ushered them inside. She heard the door lock behind her. For the first time in her life she opened her eyes to see her children being taken away behind her. As she looked back forward the butcher was standing there, cleaver in hand.”

“Your family told some bizarre stories on the farm. What is it supposed to mean?”

“Nothing Dear, it’s a silly old farmer’s wives’ tale. I’d rather not dwell on it. Please pass the salad dressing.”

They resumed eating without another word. The sound of them eating seemed worse than total silence.

“How can you be so content? Is there nothing about this that you regret?”

“There is one thing.”

“And what would that be?”

“I’d rather not think about it.”

As the Bames took the last bites of their meal, the clock struck twelve. All the clocks chimed once, and everyone in the whole world rose from their seats. Twice, and everyone walked to their front doors. By six everyone steps outside. Seven, everyone hugs their companions. Eight, lovers across the world share one last kiss. Nine, everyone wishes the moon and stars farewell. Ten, coyotes howl. Eleven, everyone says goodbye for the last time, not only to those around them, but to everyone and everything and the whole universe itself.

Twelve. The world as the Bames know it ends. Perhaps, the earth simply ceases to be, breaking that great law of physics and being completely destroyed, every subatomic particle wiped from the history of the universe. Perhaps the earth survives, but in place of lush green forests, vibrant blue oceans, majestic deserts, everything is replaced by cold black stone. Perhaps, the plants and animals survive, slowly taking back every inch of soil humanity had cruelly and harshly ripped from them. Or perhaps some small fragment of humanity survives, de-evolving into simple apes, and then re-evolving intelligence over millions of years. Perhaps those newly intelligent life forms, form cultures and nations, and perhaps they too grow to ignore their scientists only to go nearly extinct in some catastrophe. Maybe then they de-evolve and then re-evolve, and so comes the rise and fall of the many great species, all intelligent, but not so to the extent they can prevent their own destruction. Perhaps the cycle continues so on and so forth so that someday, somehow, a descendent of humanity, with a big brain, hooves, horns, and an udder watches as time ends and the universe itself, at last, dies.

I wrote “Blind Cows Happily to the Butcher Go” as commentary about the way science is often ignored in the US when it is convenient to do so. I’m an environmental engineering major and this story in a way represents my biggest fear for my future career. While the story was largely about climate change for me originally I think the themes are also very relevant to the way the pandemic has been handled. 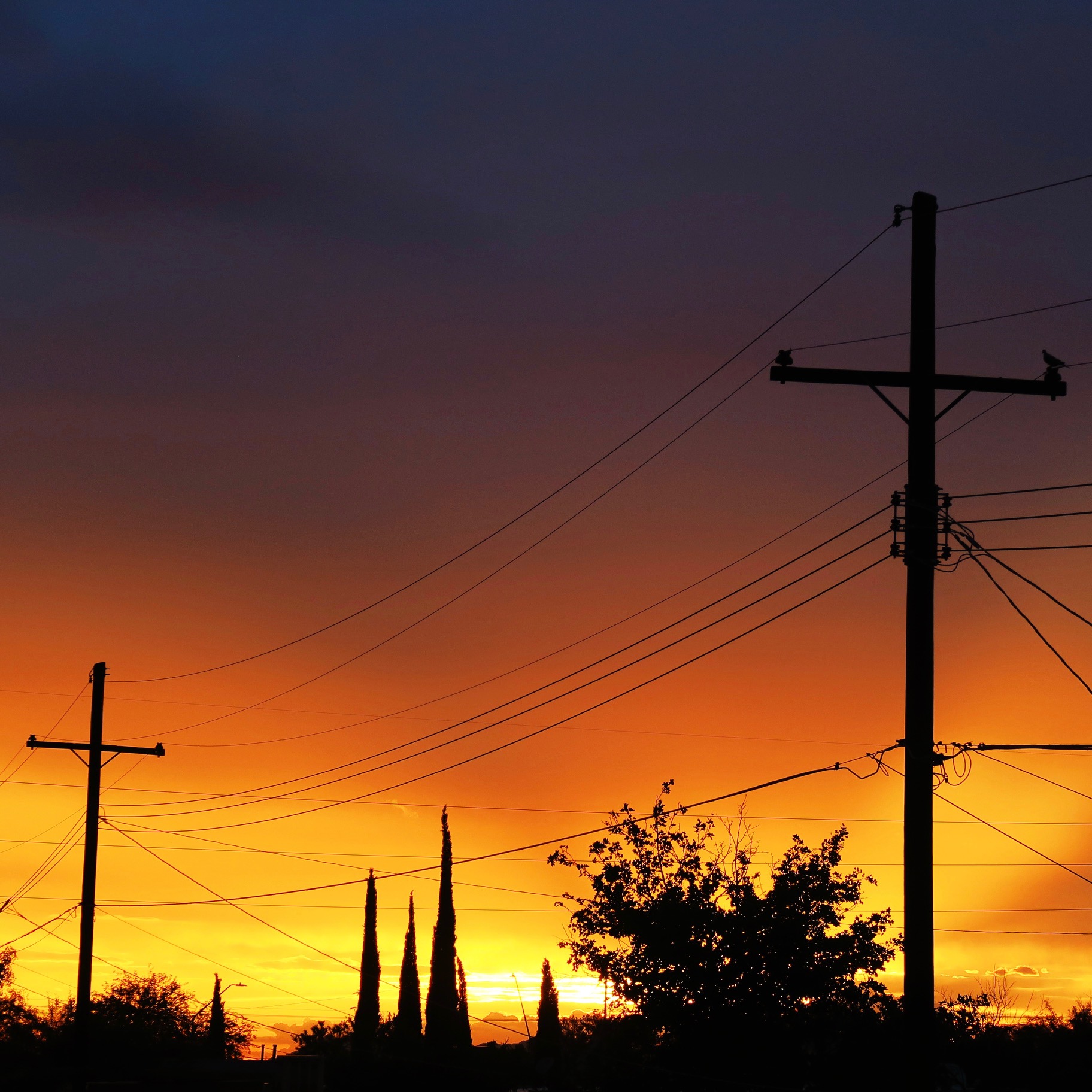 I’ve always had a passion for photography, especially landscapes and of scenes from hometown.

I wrote this poem awhile ago and I never submitted it for fear that everyone would know I still cared. But now I am content in the fact that I did care, and that’s enough for me.

Letter From The Editor

The other day, I woke up feeling stagnant. I’ve been feeling this way a lot lately, like someone hit the pause button in March and life has just stopped. This year, I have spent a lot of time at home, alone—I’ve slipped into a daily routine where I sleep, eat, work, sleep eat work sleepeatwork with the days and weeks and months blending together (how is it already October?). But these stagnant feelings confuse me, especially with the way that the current state of the country scares the shit out of me.

The world is terrifying right now. Scratch that, the world has always been terrifying, and maybe it’s because the world has disappointed us so many times that we’ve become desensitized to injustice, violence, and, let’s be honest, the shitshow that we’ve always known. Gen-Z: the generation that grew up with 9/11, school shootings, ICE, two American-instigated wars, the giant island of trash in the middle of the ocean, and the looming existential truth that, unchecked, climate change will end society as we know it. We’ve lived through the 2008 economic downturn; we know Dylann Roof’s face; our families have struggled through hurricanes and forest fires, and now a global pandemic. It’s been two chaotic decades.

This is not normal.

There will always be some amount of entropy—that is certain. But currently, it feels like the whole world is falling apart. It has never been this bad. Right now, things are spiraling in a particularly morbid fashion. And of course, everything will affect our generation more than those who are currently in power. We are so used to getting the short end of the stick that it does beg the question: why should we care?

I know that I’m probably preaching to the choir, but please: on November 3rd, come to terms with all of his flaws and vote for Joe Biden. If you can’t vote, make sure every one of your eligible friends and family members turns out. The election is only 26 days away. So, register voters, phone bank, text bank, write letters and postcards, do anything you can to get involved in this election—it could be the most important one of our entire lives. Treat this election like lives depend on it because they do. Our generation must be better than those who came before us, and we have to remember that we have the power to do so—nearly 40% of the electorate will be made up of Gen-Z and Millenials. As writers and artists, we have a special ability to communicate with the world, to call our people to action, to make a statement. Now is the time to use our skills to protect our democracy. It is so easy to feel stagnant and insignificant during this time. And even though the world is literally on fire right now, know your power; have faith that you can make a difference. We can do it. We have to.