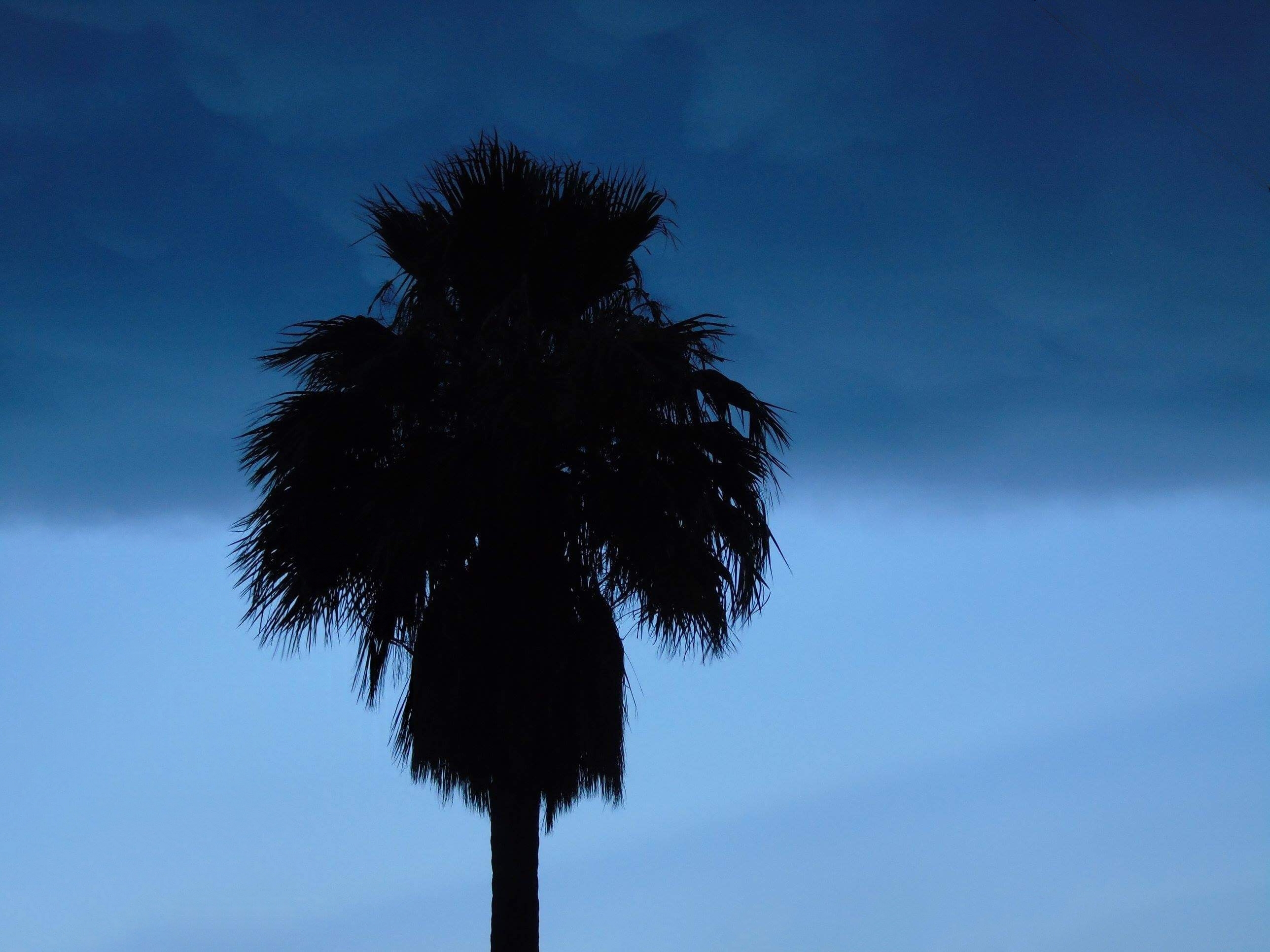 I walk along a road
that shows signs of spring,
Trees lush with life
The once still air now filled with music

Yet, there’s an ache in my head
A drag in my arms
that takes over my body
like plaque on an old person’s tooth

I wrote this poem last summer, where I felt like I was making progress with my anxiety. One day I woke up, and felt like I was back at square one. It was only then that I truly understood the hold anxiety has over my life, and that realization was utterly dumbfounding. It leads to the questions of “Why and where did my happiness go?” 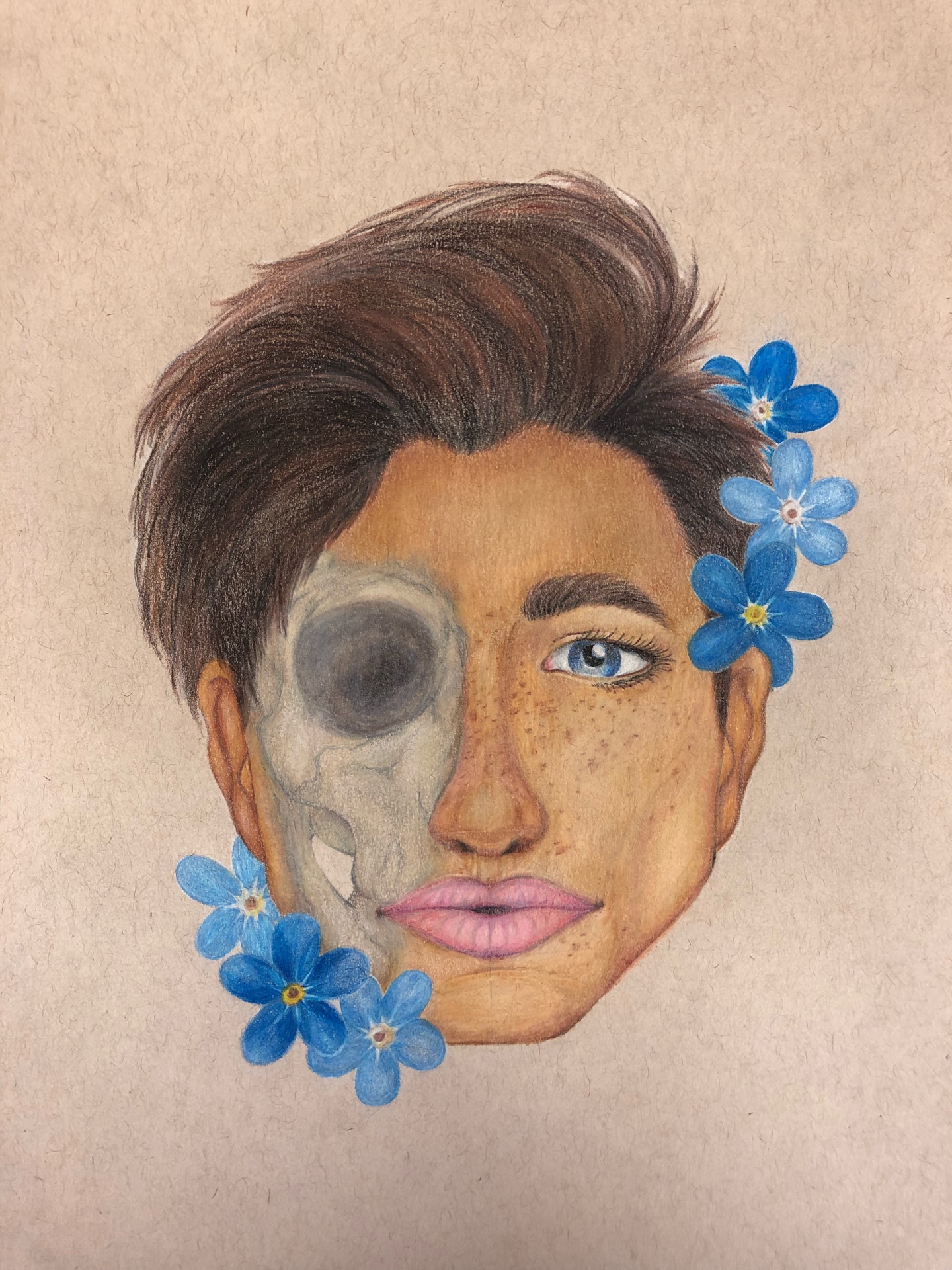 This is a piece from last year. It focuses mainly on the relationship between life and death: a feeling of confusion but acceptance, almost natural. This piece displays a non-binary, ambiguous character in a cluster of blue forget-me-not flowers, which serve as a distraction from the skull peeking through the skin.

Drawing has always been pretty important in my life; its an effective way for me to consolidate emotion and inspiration. I enjoy creating pieces that subtly hint at the strange ways people perceive and feel different emotions.

I wouldn’t really consider myself to be overly passionate about writing, whether that be stories, poems, prose or more. However, I felt like this poem was important to share because I believe there needs to be more of a conversation on both mental and physical illness, as well as more representation of disability in the media. This poem tells my story, in that it recounts feelings and experiences I have endured over the past 4 or 5 years due to the incurable chronic illnesses, Gastroparesis and POTS, that I am unfortunately inflicted with. I hope it opens people’s eyes to the imperfections and frustrations of the medical field, as well as the struggles and hardships those with a disability face on a daily basis.

That everyone else is tired of asking.

When will you open your eyes and see
That our world is crumbling
That our children are dying
And our people are fighting?

When will you stop hiding?

When, when is yet?
Is it today or tomorrow or next year?
Or is it when one more child is one too many?

Well,
It’s too late for that now.
It’s already two hundred children too many.

When will you see this pattern that’s been created
Where people run around rampant
With their arms of death
And the bodies of others’ loved ones on their backs?

So I am going to ask one
Last
Time.

When does it stop?
When will you make it stop?

The lust for peace and balance is a strong recurring theme in my work. I write a lot about the political climate of our nation and things I believe should change. I wrote this piece a while back during the March For Our Lives and I have been continuously editing it. I wrote it in anger at the idea that our lives don’t matter and that our so-called leaders in Congress refuse to do anything to end the violence. Do they not realize that we are their future? Or do they just not care?

it is the end of another summer
rest on the off white wicker of my mother’s back porch
wish the sun wouldn’t paint me bright yellow, shadowed and uncertain
and call me an angel
feel the safety net go and take my breath away
and let me hold the hands of another summer,
greener and damp with sweat and tears that
didn’t belong to me 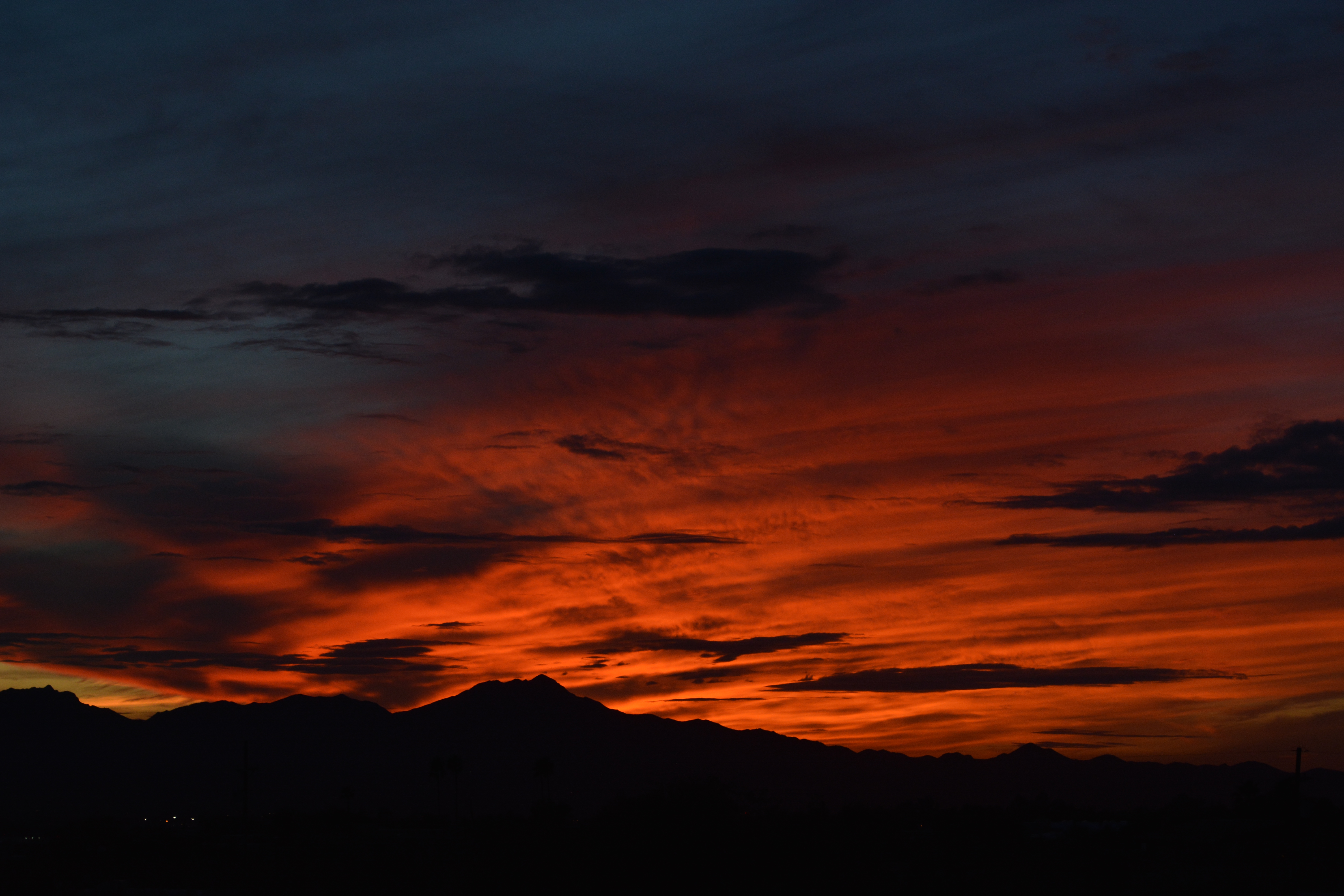 I AM AN ALIEN

I saw an alien on my stop at Circle K in the morning. He was wearing some very worn out jeans with millions of oil, paint and dirt stains and a couple tears here and there. His steel toed work boots looked painful. He was buying himself an energy drink with whatever extra dollar bills he had in his pocket, I’ve never liked energy drinks but I’m sure that’s what gets him through his 18 hour shifts. I saw him again outside in the parking lot, hopping into his old work truck. I wondered where he worked; Was it construction? Painter? Agriculture? I had no idea but I knew it was a job I wouldn’t be caught doing without breaking a nail, getting a spec on my $150 shoes or ruining my hot iron curled extensions.

I saw an alien on my way home from school. I stopped at a red light in my still brand new 2016 Ford. He was sitting on the corner with those little ceramic statues of cartoon characters, some bags of tamales and boxes of fruit being advertised in the bed of his truck with a sign with prices on them. His little corner stand was dry with no customers but for some reason he sat on his lawn chair patient, with a calm smile on his face. It was 110 degrees outside.

I saw an alien in class. She sat next me, a dreamer. She was on her phone the entire lecture which was unlike her, she was a straight A student. I wondered why she was so anxious, it seemed as if she was waiting for a call. My professor let the class go to break and we all walked out of the classroom for a breath of fresh air and some snacks and there she was, she finally received the call she was waiting for. She was crying, I listened closely, I don’t think she knew I know spanish but I also don’t think she cared enough to pay attention. In spanish she said, “Mom, my dreamers rights are being taken away because we are under a new leader, I’m 2 semesters away from graduating but they’re making me go home to you. Please, don’t be mad, I’m sorry.” We walked back into class once break was over. She took out her notebook and she continued taking notes as if her deadline to go home wasn’t there.

I saw an alien’s wife at Walmart. She had a couple bottles of Fanta soda, a Tres Leches cake and ingredients for a carne asada. She stood in line behind me with her two children, one around the age of 15 and the other around the age of 8. They were excited and celebrating tonight, their dad and her husband of 25 years finally received his citizenship papers after 12 years of processing. She explained to them that they wouldn’t have to worry about being torn apart anymore, that even though she still didn’t have papers due to processing they will always have their father to fall back on here, in the U.S., safe, secure and allowed.

I saw an alien at my family gathering. He was my grandfather. He worked in the fields from before the sun came up till after the sun come down. He was kind, genuine and giving. He filed taxes every year, paid bills and loved his family. He and his wife, my grandmother, came to the United States in the 70s for a better life for their children. Mexico is where we come from as latinos but it’s dangerous and doesn’t have much to offer when it comes to making a secured living for families. They moved to Douglas, AZ, a border town. Border Patrols swept every street and every corner every single day. My grandfather would sometimes go weeks without walking outside trying to avoid the border patrol who would park outside their house. After 30+ years of being an American, he passed away in 2007, as an alien. Honored. My grandma received her citizenship in just 2013. Now, because of them my mom and her brothers get to work here in the United States and offer their families everything and more. Because of them I get to be an American, I get to practice my religion of choice in public, I, a young woman, can walk outside without worrying about being harmed and I even just get to go to school.

So, I stopped seeing aliens and started seeing people.

Writing has always been a huge part of me, but this specific piece holds a great significance to who I am and what I believe in. My dream has always been to inspire and speak hope into others through my words. I am so proud and humbled to be able to share this piece with you and hopefully the entire city of Tucson.