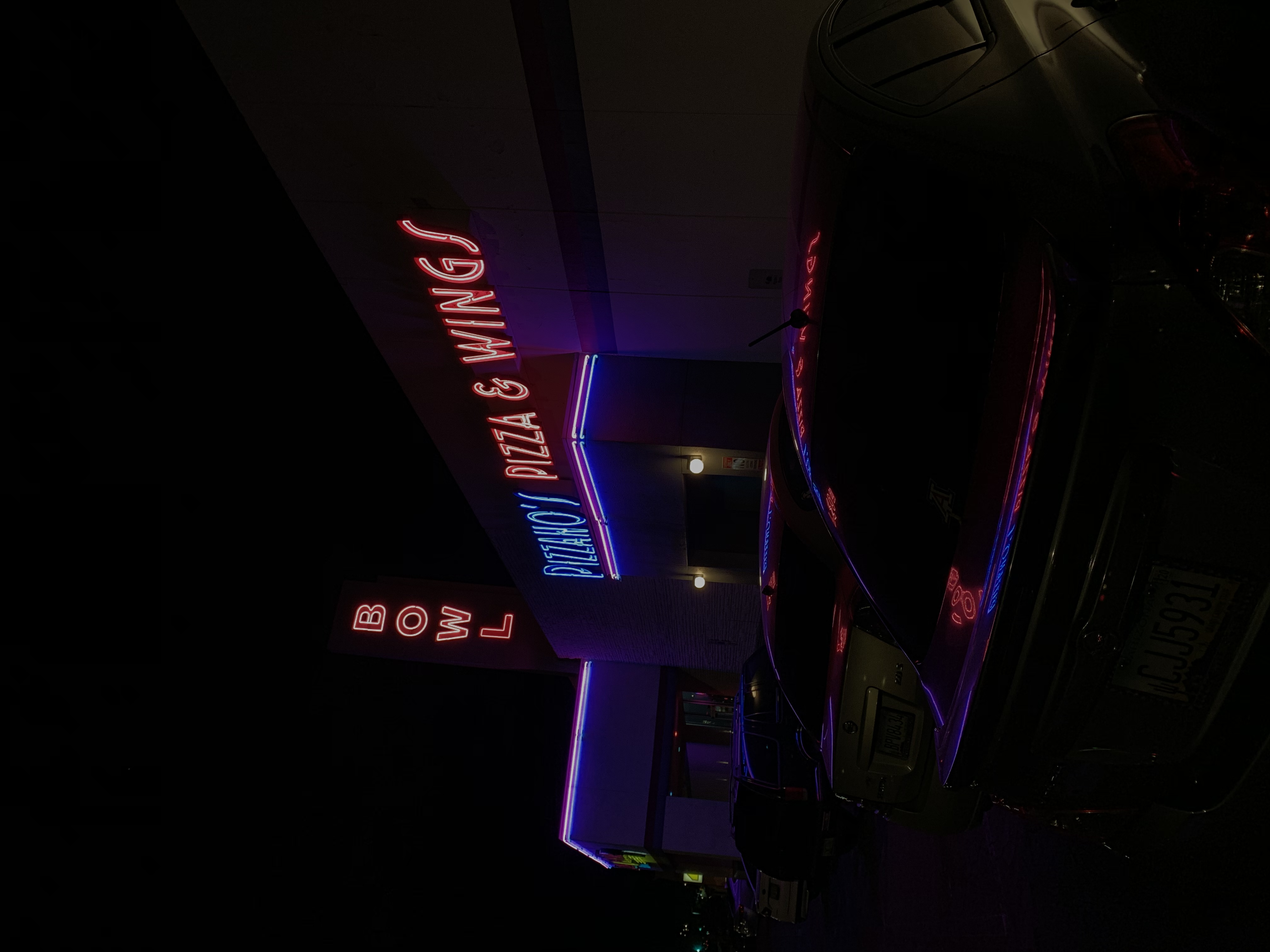 I took this photo in a state of awe because I had never seen this particular sign illuminated before. It was an oddly spectacular moment that I was able to capture through the beauty of photography.

Ava sat on the edge of the sidewalk waiting for Valerie– a coke in one hand, cigarette in the other, the bottoms of her black corduroy pants brushing against the street. As Valerie pulled up, Ava began to rise, her heart pounding from her chest. This was the first time she would meet the people that Valerie hung out with every day after school. She got in the car, giving Valerie a nervous smile.

“What’s wrong?” Valerie asked, clearly noticing the hesitation in Ava’s features. “Nothing… How was your day?” Ava asked, trying to change the subject. She didn’t want Valerie to think that she wouldn’t like her friends or was too scared to meet them. Valerie chose to ignore Ava’s anguish, instead, the girls joked and laughed throughout the car ride like they did as kids, sitting in the back of Ava’s mom’s minivan.

Valerie stopped in front of what looked to be an old, abandoned art warehouse in the middle of the art district. The girls walked in, Ava’s heart began to pound once more. The room was dimly lit, and there hung a musk in the air. Valerie walked to one side of the room and a man came forward from the shadow.

“What’s up, Skip?” Valerie casually said. There was no answer. Skip didn’t talk, instead, he handed Valerie a package, for which she handed him a small envelope. There was no dialogue following the transaction, nonetheless, their actions seemed natural.

As the girls backed out, Ava asked about their interaction, trying to hide her apprehension.

“Oh… Don’t worry about it, it’s no biggie,” Valerie said, shrugging it off. Ava gave her a glare but decided not to push the subject any further. The girls walked along the sidewalk towards Club Congress, where they were supposed to meet Valerie’s friends.

“So, what do your friends like to do?” Ava inquired. A worried glance swept across Valerie’s face.

“Oh you know, the usual teenager stuff… party, hangout… Why are you asking?” Valerie seemed worried.

“Just wondering if they’ll like me,” Ava shrugged. As the girls approached the old hotel, Valerie began to wave maniacally. A group of people waved back, summoning her to come closer. There were three boys dressed as though they were homeless– shirts that hung below their knees with the phrase “SUPREME” emblazoned across their chest, tattered jeans, and beanies that covered their scraggly hair. Another girl peeked from behind them, her fishnets peeking out from above the waistband of her mom jeans, her baggy black shirt layered over a tight fitting red long sleeve.

“Hey, guys! This is my friend Ava that I’ve been telling you about!” Valerie exclaimed. Her friends gave Ava a brief nod of approval and began to walk off. Valerie followed in haste, telling Ava to keep close behind. They walked behind a building, where they found a small alley. Valerie pulled out the package from her front pocket, opening it to reveal a small ziplock bag of Xanax. Ava got up, holding back tears as she realized the path that her friend had succumbed to.

“A street rat is a person who is comfortable wherever they are. This story took reference from Tucson teenagers– those that are typically found downtown, hanging out, and are seemingly free. The story references drugs and the idea of losing friends to addiction, focusing on the changes we go through in adolescence and the people we choose to be as a result. The story ends abruptly to allow the reader to come to their own conclusion about the characters and what they ultimately decide to do.”

I made this piece to represent emotions, those being anger, pain, and grief, which are some of the worst yet most common emotions to feel. They often come, together, too, giving them the name of “worst best friends”. To me, art is a way of expressing my emotions and I can show the physical feeling, as seen in this piece, although many times it is more internal than anything.

on january 24, 2018, USA gymnastics team doctor and michigan state university physician, larry nassar, was sentenced to 175 years in prison after being accused of sexually abusing over 300 girls

this number has recently moved closer to 500

before his sentencing, nassar wrote a letter to judge rosemarie aquilina which she chose to reference in court to justify her ultimate decision stating that this man simply had no respect for women

within his letter, in the parts where he was not vindictively victim blaming his juvenile patients, nassar condescendingly used the phrase “hell hath no fury like a woman scorned”

and boy, was he right

i have seen them suffer, and hurt, and be silenced

i have watched them overcome, and fight, and prosper

you see, women are the unforgiving sun that burns and blisters your skin when you’re around longer than they want you to be

women have more power in them than fire, and stars, and suns

the women who when thrown into pits of snakes did not succumb to the venom, but emerged like medusa

the next time that you place a mentor, a trainer, a coach, a physician, a doctor, into power only to enable him by silencing his victims

“Hell Hath No Fury Like A Woman Scorned” was written in a chaotic outburst of internal passion. I had recently watched a documentary about the survivors of the USA Gymnastics scandal and was in the midst of reliving the anger and frustration that had consumed me when the news first broke out. That, combined with an immense appreciation for the powerful women around me, inspired me to somehow assemble a small piece of art to tie it all together. This slam poem serves as reminder of the strength of the abused victims, as an ode to the goddesses who have raised me to become the woman I am today, and as a personal reminder that the power of united femininity is unfathomable.

In Memory of the Old Chicago Store 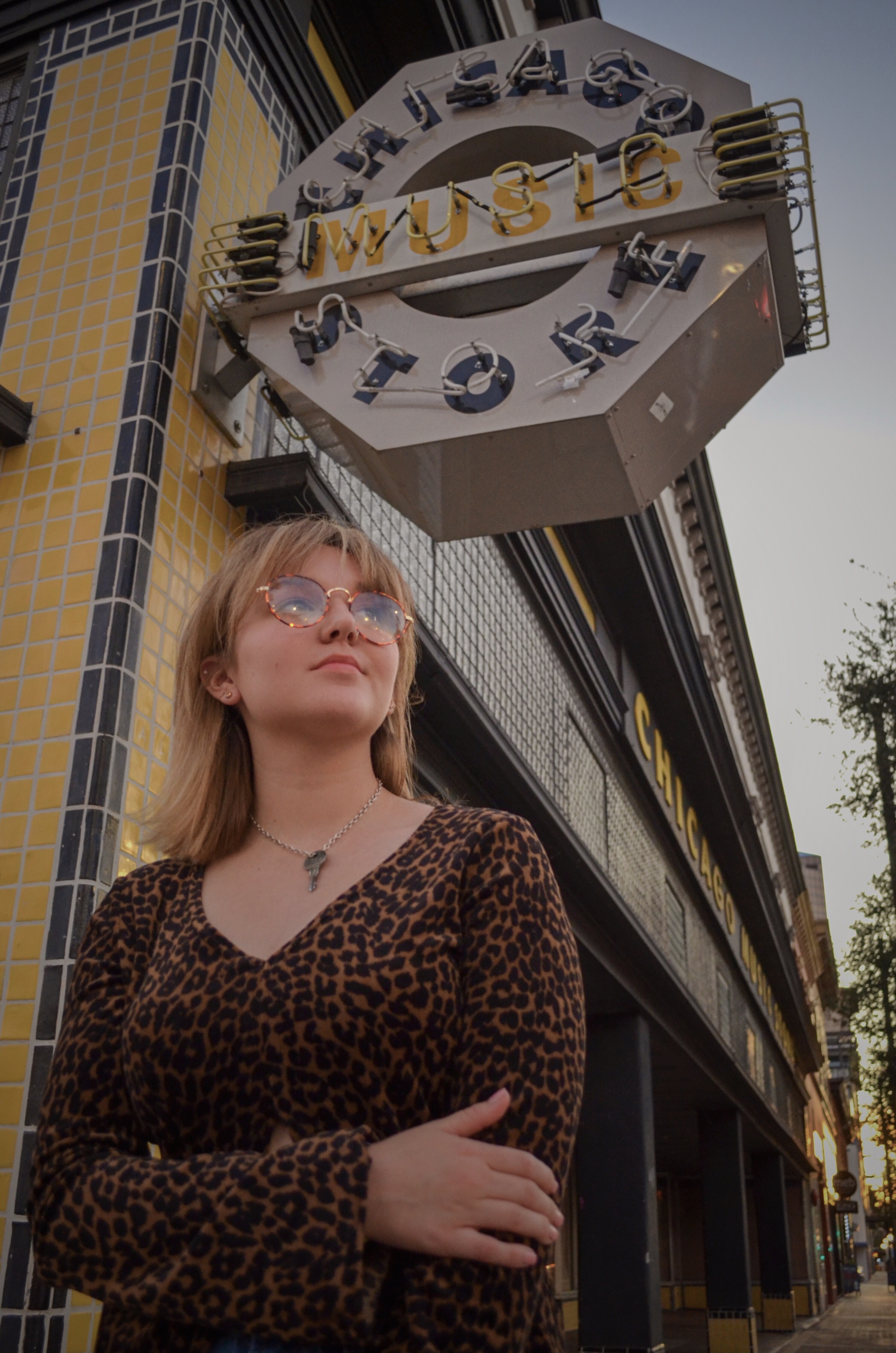 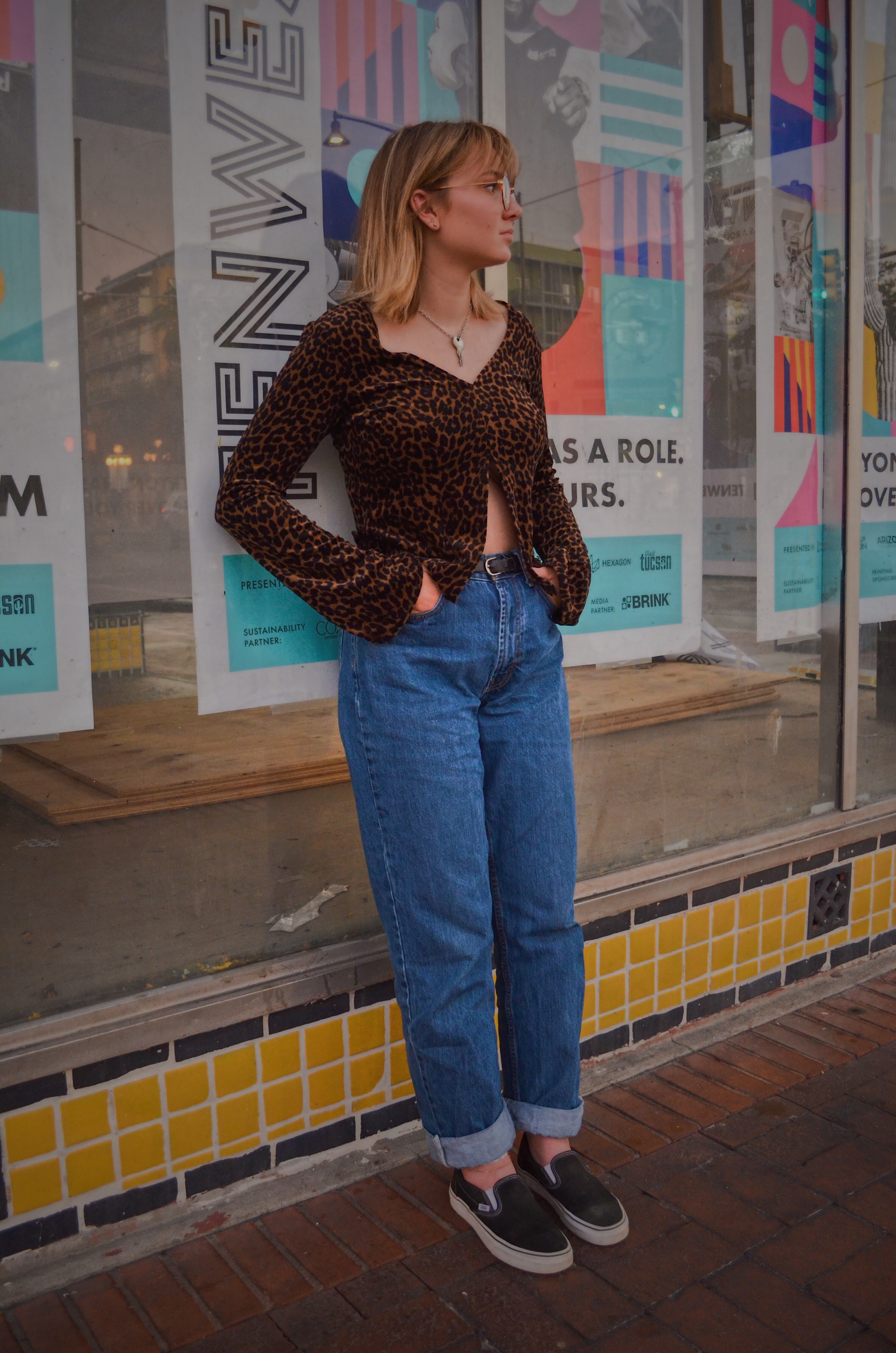 I painted this because I had to paint something. Quarantine makes it really easy to do nothing. If I don’t do something creative or physical for enough time it feels like my heads going to crack open. All my thoughts and passions turn against each other and I’m left feeling conflicted about nothing in particular. This painting clashes. Lines slant into curves with poorly defined boarders. There’s light with no source in a not-so-dark darkness. There’s a lot happening and yet it still feels like there is unused space.

The weather man is all out of predictions.

The design of this painting is a design from The Magnolia Vase by Tiffany & Co. My Great Great Grandfather was the one who actually made the vase for Tiffany and Co. The vase is currently in display at the MET in New York so the painting is just a way to have it here in Tucson.